The 8th of January 2017 marks the day I moved to London after living in Bucharest for more than 9 years.

After 4 months of many ups and downs of being in London, we decided it was about time to go outside for a change and start experiencing more of what England had to offer. We searched online for one day trips from London and one of the places that caught my attention was Dover. Why is that? Dover Castle! I’m a huge fan of castles and I just had to get there after seeing some breathtaking shots of that place. As such, on the 30th of April we planned our trip to Dover!  Ok, maybe planned isn’t the correct word to use this time as we didn’t really plan anything, we just went with the flow.

We left home a bit late in the morning and took the tube to St. Pancras International station. The first train to Dover was due to leave in around 5 minutes so we hurried to buy or tickets and rushed to catch it. That was a bit of a mistake…rushing things is never good. We bought two return tickets from the vending machine, picked up the two printed tickets and started running towards the platform. Turned out the machine was still printing tickets when we left, as we had to pick up four instead of two. We didn’t miss our train but ended up paying for one extra ticket. Boohoo for that. I was a bit down after that little incident but got over it when the scenery started to change…no more concrete jungle…just green everywhere. All of a sudden I became very excited and I couldn’t wait to get there and start being a proper tourist!

We got to Dover Priory after a little over an hour on the train (yey for HighSpeed trains). When we got off the first thing that struck me was how quiet that city was. Where was everyone? Not that I could complain, I needed a break from crowded places.

Dover castle was built during the reign of Henry II (11th Century) and the reason for building it at the time wasn’t for defense purposes, but to save face following the murder of Thomas Becket, the Archbishop of Canterbury, whose murder Henry was suspected to have ordered.
In time though, for over nine centuries, the castle has played an important role in defending the coast line and it is also know as the ‘Key to England’.

I believe it took us around 20-30 minutes to walk up there. Thanks to our awesome orientation skills we didn’t reach the main entrance of the castle but the Constable’s Gateway. Luckily there was a ticket office there as well and we could get in without walking around the whole fortress. 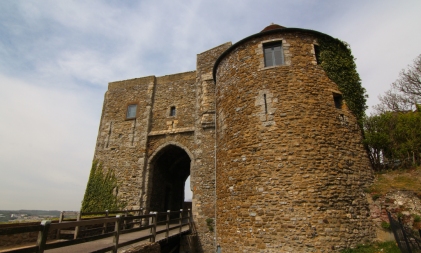 As we didn’t enter through the main gate, we felt a bit lost in space at first. We decided to just take a right and see where that road took us and we reached the place where the Underground Hospital was located. The underground hospital was built deep into the White Cliffs in 1941-2 to treat injured troops during WWII. As there was a huge queue at the entrance we decided to not waste time waiting in line there and come back later (when we did come back, the queue was just as big and this is the only part of Dover Castle that we didn’t get to see).

From the Underground Hospital we reached the WWI Fire Command Post and Port War Signal Station.
Dover Castle played an important role in both the First World War and in the Second World War acting as military headquarters and the Fire Command Post and the Port War Signal Station that we can visit today were used in both world wars.
Next to the post they also have on display an authentic anti-aircraft gun from WWI for anyone interested in that kind of thing. 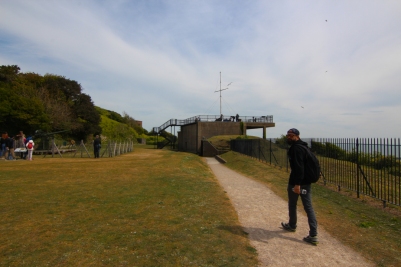 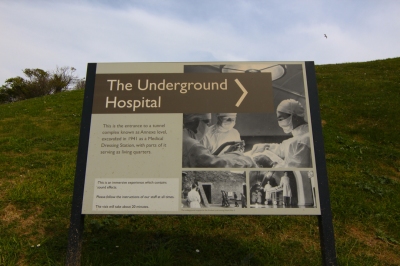 From here we headed towards the medieval part of Dover castle (and my favorite part).

On the way to the actual castle we got to see one of the best preserved Roman lighthouses in Europe (or so they say). Right next to the lighthouse is St. Mary-in-Castro Church, an Anglo-Saxon Church originally built in the 10th Century on the Castle Hill. The church was heavily restored in the 19th Century so it must have looked quite differently back then. We went inside to rest for a couple of minutes, took a few photographs and hurried to the Great Tower! 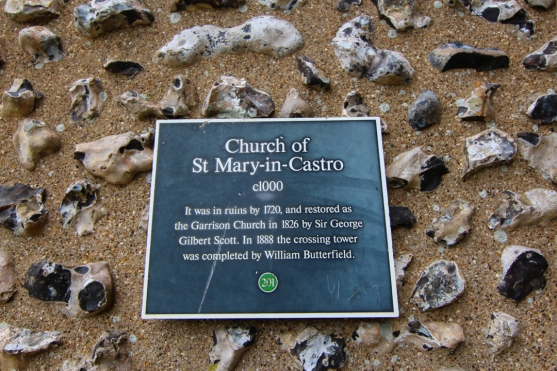 Inside the Church of St Mary-in-Castro 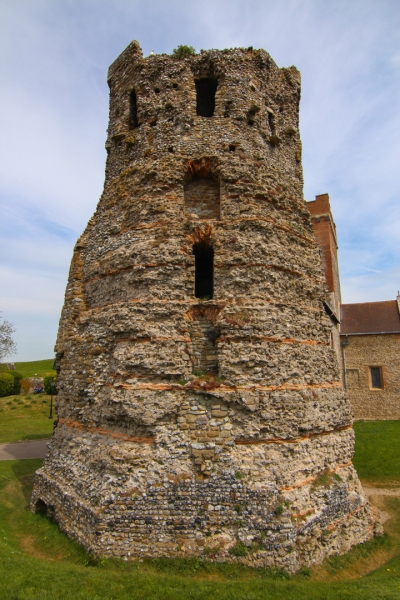 The main building around which the actual fortress was built is called the Great Tower.
The interior of the tower was recreated to give life to the court of Henry II and it does feel like you’re back in medieval times when walking around that building.
After we escaped the crowd (we eventually found it hiding in the keep), we got to the top of the tower and enjoyed a beautiful view until we froze our asses off (it was quite windy and cold up there) when we climbed down to head for the medieval tunnels. 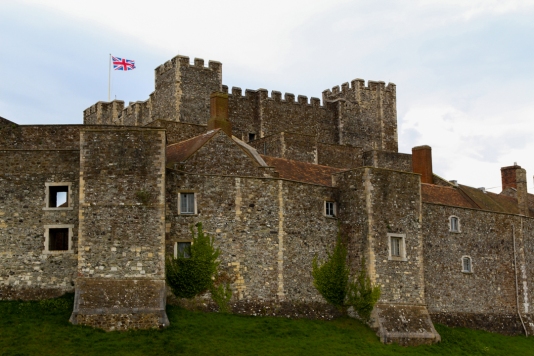 View from the Great Tower

We had spent around 4 hour at the castle when we decided it was about time we ate something. We had a really big appetite after all that English History.

I think we walked another 40 minutes around Dover to actually find a place where we could eat. Most restaurants were closed or we didn’t find that appealing, but eventually we found the perfect spot. The place was called ‘Blakes of Dover’ and we fell in love with it. The food was really good and the atmosphere was amazing. Downstairs a band was playing live music and everybody was in such good spirits. We ate upstairs and got the much needed rest and boost of energy before we set off to find the famous White Cliffs of Dover.

In search of the White Cliffs of Dover

I didn’t really know what to expect when we started walking towards the cliffs but I loved our little hike. It was so serene out there, hardly any people around, and there were rabbits all over the place. It felt like I was in ‘Watership Down’ with all the rabbits hopping around. Also, there were signs saying something about ponies, but we never got to see any ponies around (sad face). It would have been perfect if it had also been a bit sunny but maybe next time, as I would love to go back one day.
Ok, so maybe the cliffs weren’t as white as one might expect (the light wasn’t the best either to be fair), and you don’t really get the same views as you would if you were out at sea, but it’s still well worth walking along the coast. It is quite unique.
When we reached the South Foreland Lighthouse we decided to head back as it was getting dark and we did have a train to catch! 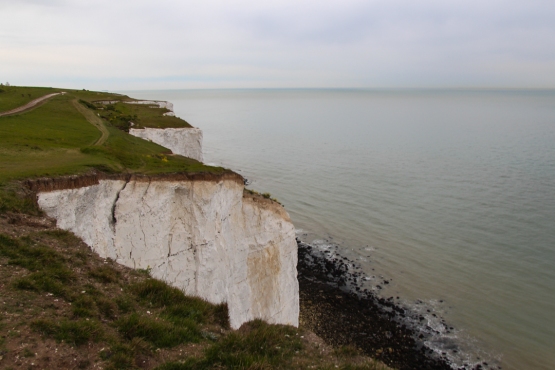 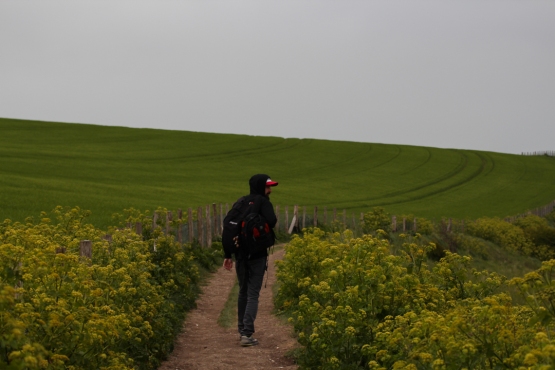 The way back to Dover was painful. We had been walking for so many hours, and I wasn’t really wearing the proper shoes (shame on me)… I love my Vans but they are the worst when it comes to travelling and walking long distances. I felt every little cobblestone that I had stepped on.

We got back to the train station just in time to catch the last train that was leaving for London.

At the end of the day we were exhausted but it had been an amazing trip and we were already thinking about our next adventure! 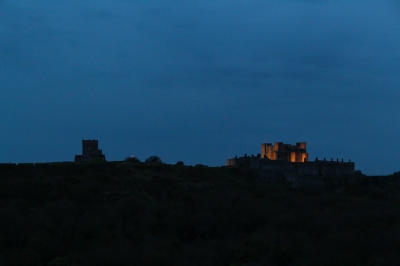 One thought on “Trip to Dover, UK”

Hi, I'm Gabi, a 29 year old Romanian currently living in London and this is my little corner of the Interwebz